I'm actually interrupting my reviews to throw in an extra post here, mostly so that I can refer people to this post later. Though I finished and presented Vigilante in time for Convolution, and posted about the whole process throughout, I don't think I ever posted much about the game itself.

There are two things I'm excited about about this game. Well, three, really. Okay, maybe four. Let's just say five and call it a day.

One: The whole reason I built this in the first place was to test out a core mechanic that I'd been playing around with. The idea is that you roll a couple of dice and try to roll equal to or under your skill. But there's two tricks. First, a higher result is still better than a lower result, as long as you don't roll over your skill. This makes contested rolls very easy, because you can simply compare the die result. And the probabilities on this are very similar to a roll and add system like d20. The second trick is that the dice you roll are determined by the difficulty of the test. This is a complete inversion of the standard model, but I think I really like it. So for example, for an easy skill test, you would roll 2d6, whereas for a difficult skill test, you would roll 2d10. Increased difficulty past 12 can be added by adding more dice.

Two: Staying with the system for now, I'm excited about the Aptitudes and Proficiencies system. Instead of one list called "skills," characters have two sets of traits: aptitudes and proficiencies. Aptitudes are a measure of capability, rated 1-10, but they are somewhat generic. Proficiencies are binary, either you have it or you don't, and they determine whether you are trained in a specific toolset and type of activity. For example, "Target" is the aptitude related to any ranged attacks: aiming, shooting, archery, etc. But in order to use a sniper rifle, you would have to have the "rifles" proficiency. The intent is to represent the way that as people grow skilled in an area, it's easier to pick up new skills in an area. It's not perfectly accurate that if someone is trained in guns, they'll be roughly similarly skilled in all the guns they know how to use, but it's at least as accurate as the standard RPG abstractions, if not more so. And it's an attempt to resolve both skill bloat and the blurry-lines-between-skills problem with hopefully a little more elegance than Gurps, for example.

Three: I really like vanilla mortals. I don't know why, but I just do. And they get so shafted in so many systems. Look at Exalted; you're shooting yourself in the foot right off the bat if you play a vanilla mortal. Vampire, or all WoD, you completely miss out on half the system if you don't play one of the magical races available. There are systems that can support vanilla mortals, like Dresden Files. DF has the cool system where there are certain types of special abilities that vanilla humans can take just because they're badass. But it still doesn't compare to what the specials can do. Vigilante is built around basic, mundane humans at its core. Later expansions can introduce rules for more fun and monsters, but it will always be about humans. 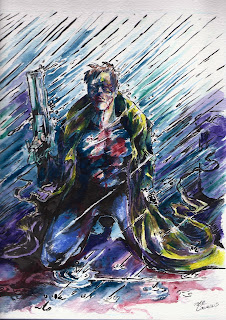 Four: This is core to the whole concept of the game: The nature of the world is a mystery. This is possible because the focus is on normal humans. At the beginning of any game, all the players know is that it's a totally normal, mundane, modern world, but something weird, bad or dangerous is going on, and no one else is going to do anything about it if they don't. This gives the GM freedom to create a real mystery. Maybe it's actually ghosts, or maybe it'll be a scooby doo ending and it turns out to be the guy who runs the water slide messing with folks. The freedom is yours.

So, there's is my defense of Vigilante. Because I do plan on charging for this, I'm not going to put a .pdf of the rules up here right now. It's still in alpha, though, so if you're interested in playtesting it for me and providing feedback, contact me, and I will also soon (within the next month or two) get a link for people to buy a .pdf of the alpha version of the rulebook as a way to support the project. The current roadmap puts the next year in production, further development and testing. Currently estimated for a full launch in late 2013.

Let me know what you think!
Posted by Ashton at 8:39 AM

Email ThisBlogThis!Share to TwitterShare to FacebookShare to Pinterest
Labels: Vigilante

Ashton
I am cofounder of Story Tables, a professional tabletop roleplaying service.